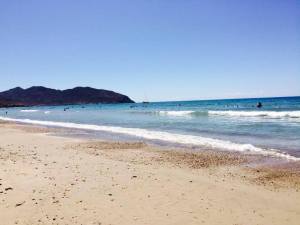 Recently, holidaying in Spain I was feeling very lucky that I had arrived in such a beautiful location – boiling hot, wall-to-wall sunshine and the beach only a short drive from where I was staying – lovely!

Everything was going well, I had the sun, sea and it was hot – what more could I ask for? Until…..I had to try and ask for something in Spanish. Before booking the holiday I knew it was an authentic, Spanish, holiday. The Spanish themselves holiday there. No problem (I thought), after all, why go to Spain if I am going to be surrounded by British people. I also (arrogantly) thought that there will (of course!) be some people who will be able to speak English! Turns out, not as many as I had hoped for!

Ordering food was the main problem. In supermarkets I could get by with a “gracias!” and “Hola!” and “Adios!” then looking at the till to see how much I needed to pay in Euros. Seeing as we ate out quite a bit for lunch and dinner, this became a chore and quite frustrating. My frustration was not so much with the Spanish people (they are in Spain, why would I expect them to speak English!) It was more with myself and the fact that I couldn’t put a sentence together in Spanish.

However, as the holiday progressed there seemed to be a divide between those who had patience and took pity on us simpleton English people and those that were frustrated with us and ignored us from the beginning once they knew we couldn’t speak Spanish. Don’t get me wrong, I went into cafes and restaurants with a smiley face, armed with my few phrases of “Hola!” “Gracias” and “Menu” and even learnt how to say “Sorry, I do not speak Spanish” – with an apologetic face. But to some, they showed no mercy and we were either ignored or treated  as if we didn’t matter and were greeted with a frown and lack of patience.

Before I continue, I want to say this is not a blog bashing our Spanish friends! On the contrary, it made me look at myself and how I may treat people who cannot speak my language in my home country. I am also mindful that any nationality (including British) could behave in the different ways I have described above. It made me think about how my friends and family may treat those who find it difficult to speak English (both those who speak a foreign language and also those who are deaf).

Whilst in Spain I found it frustrating that I was not able to get across what I wanted to say. It made me think that I really wouldn’t want other people to feel this way because of my lack of patience towards them. Of course, that doesn’t mean I will go out and learn all the languages of the world. Instead, what it does mean is that I can make a conscious effort to be patient when I am faced with problems in communication.

Perhaps we can all be too quick to judge or make assumptions if one has done something for someone else but had no gratitude shown. For example, moving out of someone’s way and they didn’t appear to say “thank you”.  – Maybe you didn’t hear them (I noticed when I tried to speak Spanish I would speak quietly as I was embarrassed with how I pronounced my words), or maybe they were deaf and they signed their thanks to you instead of saying it?! Or, maybe they said thank you in a different language – spoken or signed that you either misheard or didn’t see?! Either way, after being on the receiving end of feeling stupid, frustrated and partially feeling mocked – I want to make sure that I don’t make others feel the same. One of the ways I can do this is by being more mindful and patient with the various people I will inevitably meet in the future, in my home country.